It is quite common for our clients to engage a local builder, or someone personally know to them, to undertake the building of their studio.  As a result, we make sure that the studio building manual, which is provided alongside the design plans. is both detailed enough for a studio build novice to follow, and uses as many familiar materials and techniques as possible.  There is also, of course, our legendary ongoing telephone & email support that we offer throughout the build project.

Of course, many of these self builds are quite compact ‘home studios’, but not always.  Here’s an example and a few words from the owner.

Old Blacksmiths Studios (www.oldblacksmiths.com/) has been in existence in Portsmouth UK for a while.  Ben the owner wanted to up his game and re-purpose part of the facility into a decent sized control and live room.  He had the builders, but he needed the design expertise – so he called Studio Wizard: 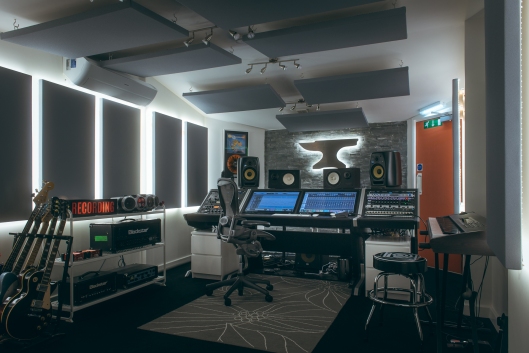 “Hi Howard, Hope you’re well. I just wanted to let you know that our studio refurbishment went very well! The work was completed in 34 days over December and January.”

“We’re delighted with the results and both us and our clients love the new studio.”

“We’ve had such a busy year and this looks set to continue for the rest of 2019 and beyond.”

It’s lovely to get feedback like that, and also great to see the commercial success that a decent studio build can generate.

The cost of a full design package is much less than most people think.  We also go into existing studios and troubleshoot issues with acoustics and isolation.

Our global reach allows us to work not just in Europe, but further afield into the Americas and also as far in the other direction as China.

If you have something you think we might help with – head on over to the website at www.studiowizard.com or give us a call!

Howard Turner has over 30 years experience in the studio business, and for the last two and a half decades his Studio Wizard Organisation has allowed him to stop shouting at musicians and going to sleep on the mixing desk all of the time, instead he gets to design studios and shout at builders for a change…

Originally written as a useful ‘how-to’ for an old Aces 24track 2″ tape machine, this guide will work well with most other machines, as the Aces has more eq control than most, so you’ll probably find your machine has less eq settings to tweak.

1). Demagnetise the heads.
Turn off the machine!
Danger! – keep demag away from test tape and other sensitive
material – switch on and off well away from everything! Power up the demag and
bring it (slowly) up to the heads. Move it (nearly touching the head) in a zig-zag from top
to bottom and then vertically up the head over the head gap. Move slowly to the next
head and repeat. Now pull it away slowly and when 3′ or more away – unplug.

2). Repro alignment.
Clean the heads. Lace up the test tape, select the 30ips AES section. Connect the
frequency counter to the o/p of any channel of the m/c. Hit play and listen to the
1k tone – if the Freq counter doesn’t say 1k, adjust the speed control until it does! –
(do the same for 15ips – while you’e at it).
Connect the RMS vvm to ch8 o/p. Play the 1k tone. I suggest we set the machine to a
400nWb/m operating level, meaning that a 320nWb/m test tape should read -2dB on
machine meters – or +2dBm on a true RMS one…If needed – set the azimuth at
this point by putting all channels into play and pushing all faders up in centre position
mono. Play the 15k tone. If you now move the head by tweaking one of the sideways
adjusters, you will see a single peak of response. This corresponds to in-phase azi
adjustment.
Do the same for the sync head.
Now select play head and play 1k(level), 15k(hf) and 60hz(lf) and set the response to -2dB
on the vu’s (equiv to +2dBM).
Use the True RMS on ch8 to check this.
(We cannot be sure the machine meters are telling the truth so if we get a channel right
by using the true rms, then we can copy that setting across and be sure it’s right (assuming
the vu’s are OK!!).

Select the sync head and do the same.

3). Rec/Rep alignment.
Clean the heads.
Lace up the blank tape.
Put 8 channels into record.
Replay off the repro (play) head.
Using your Oscillator choose 10khz and set an o/p of around 5dB below 0.
Run the tape in record.
Use the tweaker to reduce bias (anti clockwise) – watch the o/p rise to a peak and then fall.
Increase bias (clockwise) and keep increasing it past the point where the o/p hits a peak
and starts to fall.
Take it ‘over the hill’ 1-2dB (30ips), [3-4dB (15ips)].(You will need the true RMS voltmeter
to do this).

Now put an oscillator input in of 1khz(level) @ 0dB (i.e. +4dBm) – the same should come out.
Ditto at 10khz(hf), 4khz(mf)(if you adjust this you will need to check 10khz again),
and finally 100hz(lf) which should read +1dB (i.e. +5dBm).(M/c meters ok for this).
Now put the next 8 channels into record and do it all again!!
Finally, put all channels in record and listen to the o/p’s individually – there should
be no excessive or different noise on any one track.

Congratulations! Your machine is now lined up and ready to go!

Howard Turner has over 30 years experience in the studio business, and for the last 2 decades, his Studio Wizard Organisation have been at the forefront of the development of effective & affordable designs and solutions for studios.  Further information:  +447803666789 web: www.studiowizard.com